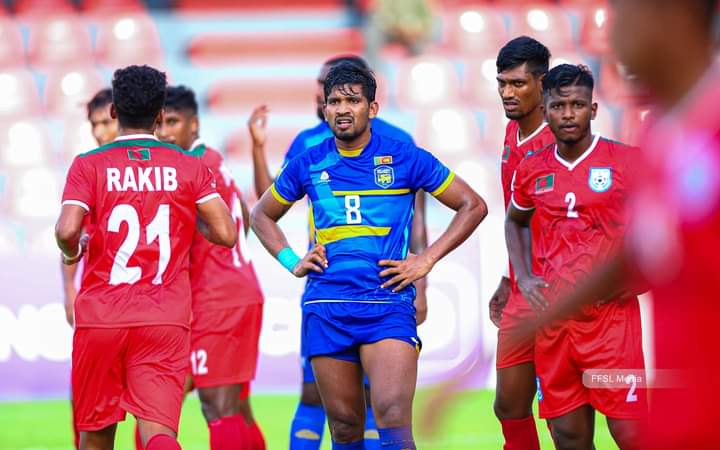 Sri lanka faced their first defeat in the on going SAFF Championship to Bangladesh in the opening game. Duckson was awarded a red card which led to a penalty.

It was a sunny friday evening, with high tempers around Maldivian Captial Male. Sri Lanka took on Bangladesh in the SAFF Championship.

The Golden Army started off well however gradually Bangladesh started to dominate the game. For Sri Lanka few tactical experiments were made with Marvin Hamilton used as an Attacking Midfielder while Chalana and Harsha were promoted as Wingbacks.

However Bangladesh did have much possessions and attempts at goal, Sujan did well with saves, keeping the scores on level at Half time.

Returning back to the 2nd Half, Bangladesh left off from where they left but Sri Lanka did not look settle as much as in the 1st Half. In the 54th minute, Duckson Puislas was red carded for receiving a double yellow.

With the shape of the team being dropped to 10 men, Sri Lanka went on to play defensive until end of the game.

It was clearly evident that Sri Lanka’s game plan was to use Long balls however Bangladesh backs did well to read the tactic well and hold the Lions back.